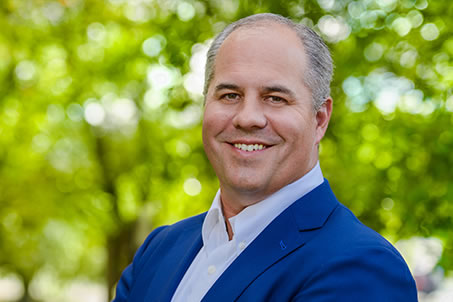 Born and raised in Marietta, GA, Brandon Hutchins, CEO, graduated valedictorian from McEachern High School. He attended Georgia Institute of Technology, earning a B.S. in Industrial Engineering with honors. In addition, Brandon played baseball for Georgia Tech and was a member of the runner-up team in the 1994 College World Series. During his high school and college summers, Brandon worked on survey crews for Gaskins Surveying and Engineering, gaining experience early on. After college he served as a senior consultant for Ernst & Young until 2000 when he joined Gaskins as Director of Operations and improved process implementation, developed organizational structure, and established many new systems early in his career. He transformed Gaskins into a growth-oriented, professional firm and was promoted to COO in 2002. As he continued to grow the company, Brandon became President/CEO in 2006 which led to acquiring the company in 2010 from founder, Johnny Gaskins. In 2012, Brandon developed sister company, Integrity Construction Management where he continues to serve in a leadership role at ICM.

Today, Brandon is deeply involved in the Marietta community. He helped launch Stonebridge Church and serves as founding co-leader of “Marietta WorkMatters” ministry. He works with multiple companies in a leadership consulting role through his partnership with GiANT Worldwide as a senior consultant. Brandon leads and participates in programs aimed at encouraging and equipping business leaders. He is involved with the Cobb Chamber of Commerce including Leadership Cobb, class of ’05, and served several board roles for LCAA from 2008-2016. In 2009, Brandon was named one of “Cobb County’s Top 20 under 40.” Brandon is also active on the Cobb County Community Development Advisory Committee.

Brandon is married to the love of his life, Nancy and has four children. He loves to play golf, play games, and travel with family and friends.